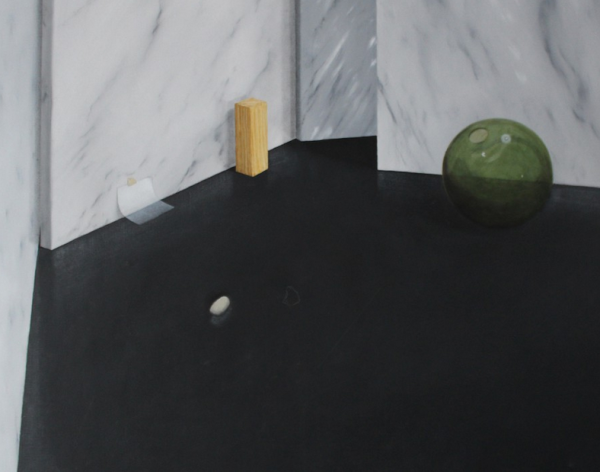 Boccanera Gallery is pleased to announce Il pretesto di Lotto, Linda Carrara's first solo show, in the new spaces of the gallery in Trento. The exhibition, curated by Daniele Capra, brings together thirty works on paper and canvas to examine the artist's recent years of research. Furthermore, the opening of the new spaces is the occasion to inaugurate the project room inside the gallery, that will be dedicated to hosting special projects and new collaborations. The first guest artist is Andrei Ciurdarescu, who will present the show I in the garden that analyses constructive/destructive interactions in gardens between anthropic elements and nature.

Linda Carrara's Il pretesto di Lotto arises from a reflection on the conceptual and mimetic dynamics of painting, and questions its representative intentions. It focuses on a free practice based on the creation of new worlds and new realities that produce entirely new visual relationships. In particular, the subject and the compositional structure, which are central elements in figurative practice, are just a pretext in the artist’s work, an opportunity to create an imaginative and suspended reality which leads the viewer elsewhere. The objects displayed on the surface of her works are merely an excuse to challenge the cognitive value attributed to reality. In Linda Carrara's research, painting itself is the hidden subject of her work, since it is the medium that evokes unconventional features of reality. In this way, her pictures are characterised by a free and precarious syntax, filled with silent poetic bewilderment and genuine contradictions of perspective. The artist's work questions and embarrasses the viewer, encouraging them to talk about or speak of something else, without the need to be consistent with the topic or the nature of the context.
In other words, Carrara's artworks function as surreal and process-based devices which lead to a visual and thematic divergence. The title of the exhibition itself, Il pretesto di Lotto (The pretext of Lotto), is proof of this attitude. Indeed, her works led to wide-ranging discussions – between artist, curator and gallerist – about many questions of art history which were relevant to the painting of Lorenzo Lotto. It was in these moments that talking about something else was the best way to talk deeply and intimately about Linda Carrara's artistic practice.
The exhibition is accompanied by a publication with texts and images of the works.

Linda Carrara's research (Bergamo, 1984) examines the models at the root of reality and is aimed at overcoming the representative role of painting. She graduated from the Academy of Fine Arts in Brera, Milan and worked as Vincenzo Ferrari's assistant. She attended the Multi Media Master at the Kask School in 2014-2015 in Gent, where she worked as studio assistant for Michaël Borremans.
Her works have been exhibited at Palazzo delle Stelline, the French Cultural Center in Milan (I), the Museum of Contemporary Art in Lissone (I), the Museo della Permanente in Milan, Fondazione Rivoli 2 in Milan, Fondazione Sandretto Re Rebaudengo in Turin (I), Croxhapox in Gent (B), LAC in Sigean (F), Le Kabinet in Brussels (B) and Fabrika in Moscow (RUS). She won the Terna Prize 06 in the painting section.
She lives and works in Gent, Brussels and Milan.