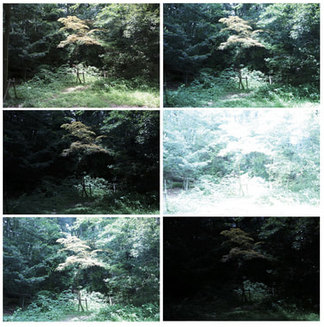 For her first solo exhibition in the Netherlands, Meggy Rustamova (°1985) presents videos and installations in which she combines photography and audio. Rustamova was born in Georgia but moved to Belgium via the Netherlands with her mother at the age of eight. While never referring explicitly to her origins, themes such as language, identity and displacement are central to her work. She approaches these subjects sometimes through performances, and at others using photos or sound installations. The medium in which she works most is video.

Themes in her work

The starting point for Rustamova’s videos  is often formed by found photos – sometimes with the addition of photos she has taken herself – which she then transfers to film and around which she constructs a storyline. Rustamova’s videos operate in the twilight zone between fiction and reality, personal and collective memory. Watching them, we can’t help but wonder whether this is about her own family history, or completely invented.

In the videos, Rustamova’s camera gradually explores the photos in the minutest detail, heightening the tension in the relationship between static and moving images. Rustamova’s work is also about images and how these present a correct or incorrect reflection of our lives. About seeing, but equally about not seeing. For example in the video Green Black Out (2014-2017), the basis for which is a series of failed photos from a trip to the Black Sea, bathed in a green filter. This forms the starting point for a poetic visual essay on memory, the power of the imagination and the inability of photography to completely capture reality.

Her work is about language as much as it is about gibberish. For example in Waiting for the secret (2014), in which her camera once again slowly scans a photo while the translation of a text in Esperanto drops out, leaving the viewer to work out what is being said. Rustamova frequently stimulates the viewer’s imagination, inviting us to fill in the blank spaces for ourselves. This is certainly the case in Light Displacement, her first solo exhibition in the Netherlands.