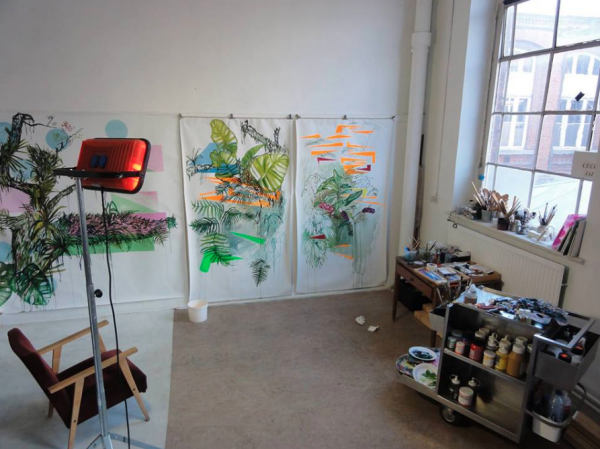 Visual artist Cecilia Jaime (°1962, Tucumán, Argentina) lives and works in Ghent, Belgium, where she has continued to develop her career through different artistic projects over the past thirty years. In this solo exhibition old and more recent works can be seen: sculptures, drawings and paintings.
Born in the Northwest of Argentina, she grew up in the period of Argentinian censorship in the 70’s and at the end of that period in the 80’s, the new «liberated» literature, theatre plays, television programs, musicals, etc. shocked the artist. In the 90's, living in Belgium she worked with other subjects as sexism in women, migration or the global warming .
Nowadays, the artist travel in between the two countries. In more contact with the Argentinian nature, her work shows a more passionate interest in the graceful yungas of Tucumán.
Those changes in her life can be interpretated in the presented works of the show.
She graduated in the Master in Fine Arts, with specialization in Painting , by the Faculty of Arts, at the University of Tucumán, Argentina, in 1987. She worked on the project " Surco", an experiment of art in Nature, at the Northwest of the Argentinian Andes. From 1985 to 1987 she was an assistant lecturer in the Faculty of Art at the same University. In 1988 she received the prestigious Grant from the National Arts Funds in Buenos Aires.
Since 1989 she lives in Belgium. In de period of 2003-2006 she worked in a social artistic project: "Scratch", from the Fine Arts Museum in Ghent. She also gave workshops at S.M.A.K. (Stedelijk Museum voor Actuele Kunst), Ghent. She has given Master classes in painting and drawing in Ghent (2006-2009). From 2006 till today she is a resident artist at Nucleo vzw ( Belgium). From 2008 she follows the Sculpture specialty at the Academie voor Beeldende Kunst (Academy of Fine Arts) in Ghent, Belgium. She also has been a consultant artist for the architects studio of Bob Van Reeth, in 2010 and 2014. She has presented her work in numerous international projects in Latin America and Europe: group exhibitions, solo shows, art fairs, in several cultural centers, museums, events and public spaces.
Some international projects and exhibitions are: Splav Meduze - Curator Marko Stamenkovic at the Center of Contemporary Art, Celje (2009) Slovenia; De Collectie - Curator Philippe van Cauteren, Director of the Municipal Museum of Contemporary Art in Ghent; CC TEN NOYE, solo show, Brussels (2010). Her video-performance 'Desierto de los destinos' was presented at the LAKMA Museum, in The Netherlands (2011). She has shown her most recent works in an installation with photography, sculptures, video and paintings, 'Stills and Movements', at the Caermerkloster in Ghent; The group exhibition De Connectie - Curators Alan Quireyns, director of Air Antwerpen, and Frederik de Preester, in Gent (2011). Finally, she has been invited to join the Artwiki of the Open Call project of the 7th Berlin Biennale (2012), with Curator Artur Zmijewski and Associate Curator Joanna Warsza.
Other important group exhibititons at Flemish Parliament Brussels Administration /Embassy of Argentina (2013),"Marina Art" at the University of Ghent , Fort Napoleon, Oostende (2013), Museum Dhontd -Dhaenens(2014) at Deurle, "Someone like you" , Galerie Hommes Rotterdam (2014). BAD (Belgian Art and Design) , K.V.D.M at Zebrastraat Kunstplataform 2016. Solo Show at Cecilia Jaime Gallery 2017.

From 2012 she is Founder owner/ Curator of Cecilia Jaime Gallery.