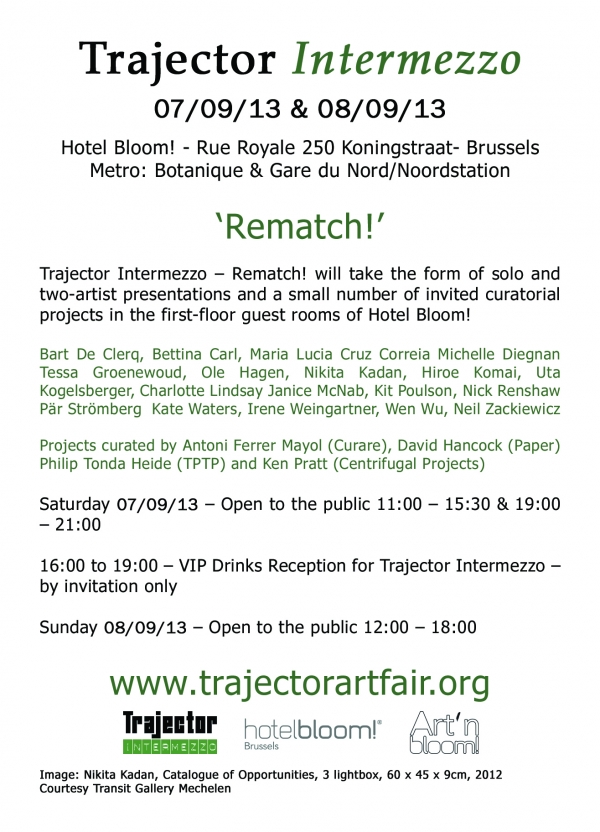 September 2013 sees Trajector once again return to Brussels after its first appearance in the Belgian capital in 2010. Trajector Intermezzo is an initiative by Hotel Bloom! and Centrifugal Projects that will take place in April 2013, coinciding with Brussels Art Days.

Trajector Intermezzo – Rematch! will take the form of solo and two-artist presentations and a small number of invited curatorial projects in the first-floor guest rooms of Hotel Bloom!

Trajector Intermezzo – Rematch!includes presentations by Belgian, British, Canadian, Chinese, Danish, Dutch, French, German, Irish, Japanese, Norwegian, Portuguese, Swedish, Spanish, Swiss and Ukrainian artists. Yet, reflecting our contemporary world, they live and work in locations as varied as Paris, Zurich, London, Manchester, Ghent or Kiev. We have, therefore, decided to list them merely by name. More details on each can be found by clicking the link to their own web presence. Similarly, those who have been invited to curate projects work in a diversity of locations.

Additional Artists wil be added once their participation is confirmed

In September 2013, Trajector Intermezzo will provide a platform for approximately 30 international emerging and mid-career artists to realise solo and two-person projects, bringing a high calibre of international contemporary art to a Brussels audience. At Trajector Intermezzo – Rematch! these presentations will be complemented by a limited number of invited curated projects.

Trajector Art Fair’s traditional focus has not been on the commercial gallery sector, but on the project spaces, artists’ initiatives and independent curatorial projects that provide important platforms and experimentation grounds for emerging contemporary artists in the international arena. In part a celebration and playful game with the role of non-profit organisations, project spaces and independent curators within the art commerce systems, Trajector takes the original concept and reconfigures it as a hotel art fair in Brussels' top design hotel. Tongue-in-cheek, critique or hardcore commercial? That's largely up to the participants and audience to determine. With Trajector Intermezzo, the game continues.

In many cases, the artists participating in the second manifestation of Trajector Intermezzo, entitled ‘Rematch!’ will directly address the idea of an hotel itself, producing works and presentations that respond specifically to the unique phenomenon that is the hotel.