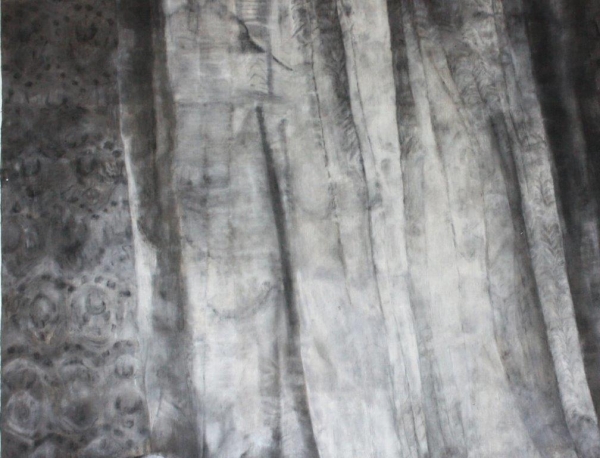 Maaike Leyn : "We all dance to mysterious tune"

as well as for the star. Human beings, vegetables or cosmic dust –

We all dance to a mysterious tune,

intoned in the distance by an invisible piper.(A.Einstein, 1929)

Maaike Leyn’s drawings are made of dust. She rubs dry charcoal and pastel pigments into the fibres of rude canvas. Part of this dust remains, finds its trace on the canvas, other parts disappear and go their own way. The artist is like a piper

who makes the dust dance in a mystical way. But the dance of the drawing is also made by forces over which the artist doesn’t have any control.

In her work, often comprising monumental drawings, the earthly material captures the essence of being or not being, disappearing.

The bare canvas and the dust of the charcoal have something rudimentary in them. She emphasises this the way she nails her canvas to the walls without frames.

This handling with the material of the work also refers to the subject: About a world which is constantly disappearing and we can’t fix, only in our memories, but also the memories evaporate.

She shows a hotelroom, a floor, curtains before the window, stairs but the humans are disappeared. The drawings are triggers which make us remember vague places, occurrences, or memories from the past.

In “hotelroom” e.g. she shows an old-fashioned wardrobe in which you see the reflection of a chandelier with three porcelain covers.

There are no clean lines, through the relentlessness of the charcoal, the drawing can’t grasp itself completely to the canvas and it forms a kind of twilight, a moment of being and not being, disappearing.