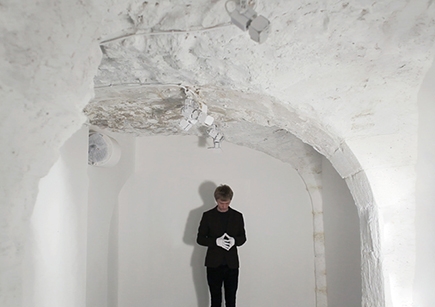 For the first monographic presentation of her work outside her native Belgium, Alice De Mont filmed her exhibition in the process of being laid out at Galerie Dohyang Lee several months before the show was in fact set up. In this new film, the artist places two characters in the situation of mounting a show, with a piece of sculpture and several layout plans. By playing off the possible correspondences between “mounting,” i.e. editing, a film and mounting a show, Retroperspectief(2013) reveals to the viewer the preparatory exercises of “display,” which is like a stage rehearsal, a casting session, or a score played on the piano. Viewers experience the exhibition in the present while retroactively watching the process that predetermines their visit.

Rather than imagining the display phase as a frozen, lifeless depiction of the work, De Mont treats the exhibition in its entirety as a work of art in itself—a palimpsest of hypotheses and variations in the tradition of Michael Asher’s architectural modifications, Joëlle Tuerlinckx’s fluid archives, Franz Erhard Walther’s retrospective drawings, and Philippe Parreno’s cinematographic exhibitions. If the art of exhibition-making developed neither a specific terminology nor a specific methodology over the course of the 20th century, it is probably because it remained an impure medium which artists inhabited like the misbegotten room of modernism. To this new production, De Mont has added a large group of works created between 2008 and 2013 that attempts to define “the right place” for an object in space, imagined simultaneously on the scale of a geographical map, the installation of an exhibition, and a basement archive.

De Mont sees her artworks as characters to be staged in different drill situations. In 2008, she created her first character,Badpakman Straatkast [Swimsuit Man of Cupboard Street], a digital black rectangle which she orchestrated on photographs shot with her webcam, often in household scenes and in connection with other objects. The character called Objet 1(2010) is a sculpture made up of a geometric shape connected by a line to a second organic shape. A series of photographs accompanying it places the work in a multitude of poses, right up to its dismemberment. In the film entitled12poot (2012), with extreme care a young man manipulates a piece of sculpture created solely for the shooting. His body moves through the room step by step, but the fragile structure, made up of twelve feet, comes apart once it has reached its destination on a table—its so-called “right place.”